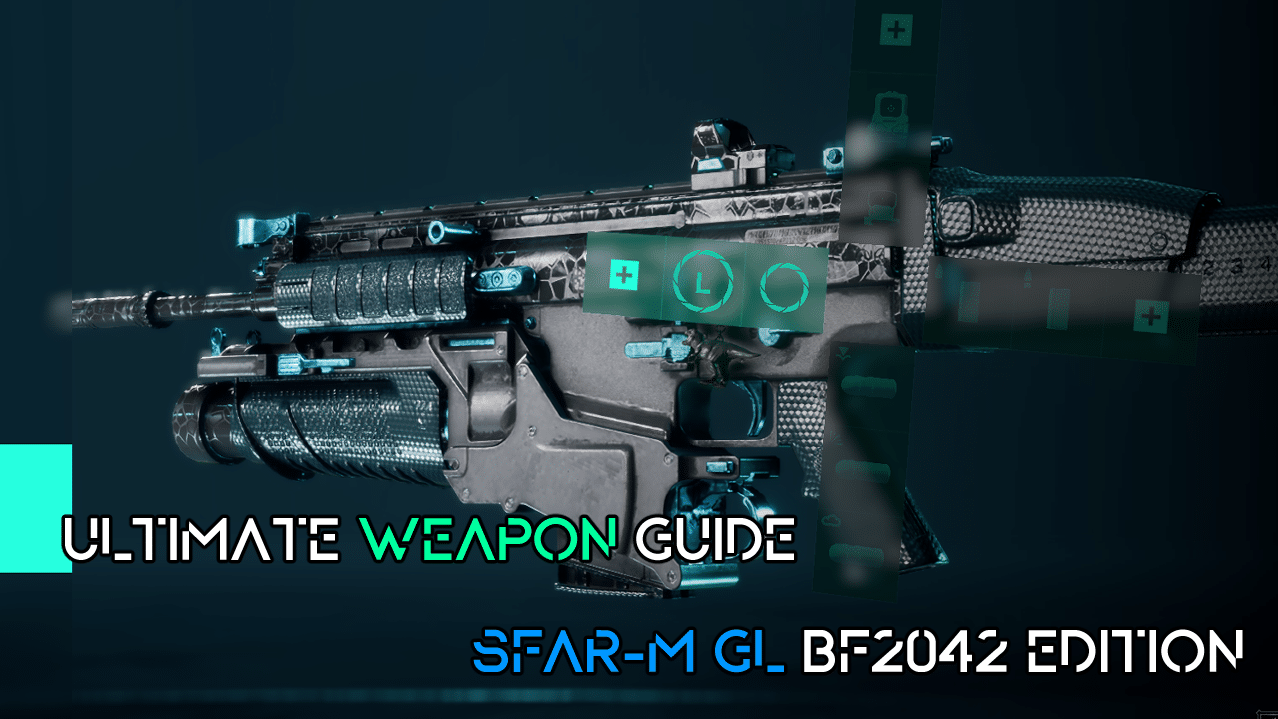 Continuning with MP1st’s weapons of Battlefield 2042 gun guides, first-person shooter fan and weapon guides maker Sorang has crafted another one, and this is a Battlefield 2042 SFAR-M GL gun guide! Check out its time-to-kill, rate of fire, effective attachments and more.

Hi! Remember how my SVK guide was about arguably the most powerful gun in the game? Well worry not, my friends, because if you hate good guns and want to use the worst thing possible, I’ve got you covered. ENTER SFAR-M GL!!

All of the data comes from my own testing using the portal mode. All of the sarcasm is my own. If you have anything to add, feel free down below! But don’t be rude. I’m lookin’ at you, Kevin. I saw you push the downvote before you even read this far.

Just a heads up that I am Korean, so my English isn’t perfect. I try hard to translate things appropriately, but if you find any errors feel free to let me know and I’ll get ’em fixed!

RPM = Round per a minute

On previous guides I mentioned that the fire power stat doesn’t actually equate to damage, but it’s actually even more confusing on this gun.

SFAR-M GL has the highest fire power stat for a full-auto gun. But, showing how the stat is weird as hell, it actually does the lowest damage when compared to the others. I guess they boosted the stat because it has a grenade launcher?

3. Range
The High Power Ammunition, which SFAR-M GL has by default, doesn’t have a range limit.

Other ARs, by default, all have limits on their ranges.

However, the High Power Ammunition removes the limit for any AR. Because of that, it’s hard to say this makes SFAR-M GL any better than the others.

Compared to other full auto weapons, SFAR-M GL has the slowest TTK.

Its TTK can even be slower than a DMR’s beyond a certain range, while its accuracy is way worse.

5. Recoil
The horizontal recoil on SFAR-M GL is very unstable and troublesome, which makes it even harder to benefit from having the High Power Ammunition by default.

6. Attachments
Silencer – I really didn’t want to get 210+ kills with this gun. I might kill myself.

On every other gun that I’ve tested so far, the silencer reduces damage by 10% at any range. I’m gonna go out on a limb here and just assume that SFAR-M GL is the same.

Standard Issue Ammunition – This ammunition increases the fire rate from 600RPM to 650RPM. It also adds a limit of 50m to the range. Beyond 50m, the damage falls off to 18 (or 36 for a headshot).

The TTK under 50m does decrease, but it still proudly boasts the slowest TTK for an AR regardless.

Extended Barrel – This attachment reduces the fire rate by a lot. At this point, a DMR might be a better choice, since the TTK on SFAR-M GL gets even slower than DM7.
When equipped with the Standard Issue Ammuntion, the fire rate doesn’t decrease. However, due to the limit on the range, the increased bullet velocity wouldn’t be needed anyways.

Some might prefer the Drum Mag. If you do, keep in mind that any other gun will always outperform SFAR-M GL under 75m. Beyond 75m, SFAR-M GL might start to perform better than others in terms of TTK, but the gun is so inaccurate that it’s almost impossible to take the benefit.

However, with the Standard Issue Ammunition, SFAR-M GL outperforms other ARs at the range of between 50m ~ 75m. Its horizontal recoil, which is the biggest downside, also gets bit better.

Of course, the gun still has many other downsides such as the small magazine size, the terrible accuracy… Not as fast TTK as other guns so you die even when you notice and shoot at your enemy what feels like 10 minutes before they even see you…

8. Grenade Launcher
The armor piercing grenade punches through the Dozer’s shield. You can kill him with 2 shots.

By now, you all probably have realized why I ranked SFAR-M GL as F Tier on my weapon tier list post. I already know youtubers will make videos about how broken SFAR-M GL with the big text saying [BROKEN] [OVERPOWERD] as well as shocked faces of themselves on the thumbnail.

Don’t let them trick you.