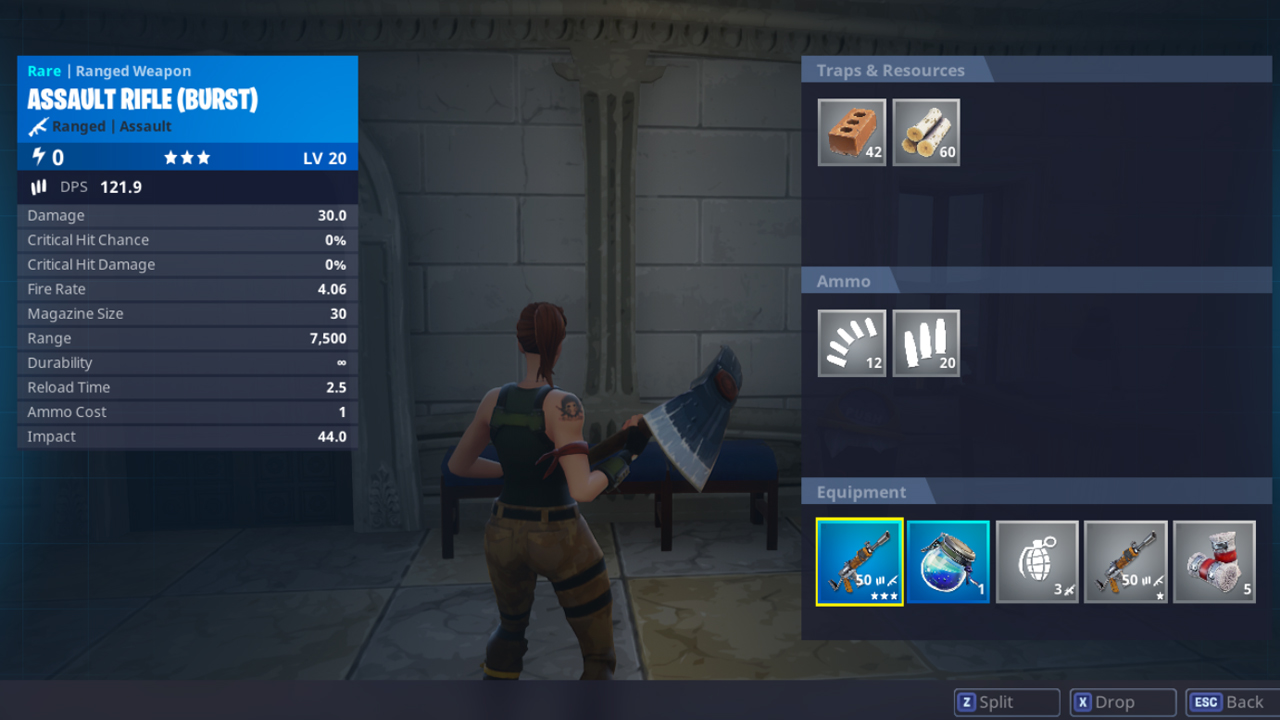 Following its tease, the new Fortnite update is now live across all platforms. This week’s patch focuses on “key Battle Royale changes to aim assist, consumable drop rates along with a whole lot of bug fixes and performance improvements.” It also features an overhauled inventory screen.

To celebrate the newly-added Xbox One X support, Xbox-themed outfits have been added to the game.

Here’s the full list of patch notes for Battle Royale: (Save the World patch notes can be found here.)

Decreased chance of getting Bandages from Treasure Chests and Supply Drops by 35%.

This should make it easier to lead targets with Sniper Rifles.

The updated aim assist system allows us to iterate easily. Let us know how you think we can improve aim assist.

Improved network priority for doors, which reduces the likelihood of seeing players run through a closed door.

Improved network priority for chests, which reduces the likelihood of them appearing to remain closed for a short time after opening them.

Players will no longer fall through the world if they are eliminated while jumping.

Gliders will no longer deploy if a player uses a Launch Pad in the DBNO state.

Player will no longer jitter while falling and skydiving.

Dancing no longer goes on cooldown if it fails to play.

Chests in attics no will longer spawn loot on roofs or outside walls.

Fixed an error message that players would sometimes receive when being invited to a BR match when they hadn’t completed the Save the World tutorial mission yet.

Removed tracers from the silenced SMG.

Sniper Rifles no longer reload while in scoped view.

Fixed an issue which prevented grenades from exploding.

Fixed an issue which caused crosshairs to disappear if a Sniper Rifle was fired right before the Battle Bus took off.

Smoke effects now appear the same in and out of the Storm.

Players can no longer see through smoke effects when using a scope from within the smoke.

Players will no longer experience a “flash” effect when multiple smoke grenades go off at once.

Reduced volume for ambient trap sounds, and made them less frequent.
Added a new warning sound that activates when a player approaches a ceiling or wall trap.

If you are spectating a player, their footsteps are quieter.

Added “terminal velocity” wind sound when falling from large heights, and impact/pain sounds for when taking damage from falling.

Increased the audio range for the sniper gunshot from 180m to 250m.

It is now easier to hear the sound of an another player gliding towards you after using a Launch Pad.

All audio for the dance emote is now adjusted with the SFX slider instead of Music.

Removed low-frequency content in the “ticking clock” sound that plays prior to the storm eye shrinking.

These frequencies could have previously been mistaken for footsteps while running.

Improved general framerate when multiple characters are nearby.

Improved performance when rendering bushes and other clutter objects.

Improved CPU performance on Xbox One and Windows by tweaking thread priorities.

Improved performance when using the glider.

Tweaked how often animations update and optimized many other animation systems.

Fixed a server performance issue caused by building actors that moved every frame.

Fixed a server performance issue where rubber banding could be caused when jumping out of the Battle Bus.

Fixed various hitches that could occur during gameplay.

You can now view your personal stats and XP gained at the end of a match or when spectating.

You can now choose to abandon one of your Daily Challenges each day.
Added “Net Debug Stats” panel to the Battle Royale UI.

This setting displays ping, bandwidth, packets per second, and packet loss for both uploading and downloading.

If you haven’t received a packet from the server in more than 1 second, the UI will also display a “Connection Lost” warning.

Currently this is only available on Windows and Mac platforms, but we hope to enable it on consoles in a future update!

Added the option to send a friend invite to squadmates on the Spectator and Victory screens (PC/Mac only.)

Added some look-and-feel polish to the matchmaking buttons.

Added a warning message that activates when players attempt to disguise themselves as a bush while already disguised.

Replaced the 60-second warm up timer with “Waiting for Players”

Increased the size of the large map so it takes up more screen space when open.

Sensitivity sliders for the mouse and gamepad will now stop at 0.1 instead of 0.0.

Disconnected squadmates will now remain on the HUD and will be listed as “Disconnected.”

Character models inspected in Save the World will no longer be displayed in the Locker tab.

The Up button on the D-Pad no longer closes the inventory tab while using the Pro Controller layout.

Settings will now properly save when players apply them and back out of the settings menu quickly.

Added descriptions to equipped items in the Locker tab.

Storm zone graphics will no longer flicker when the storm begins to close in.

You can now report players that have unicode and Chinese characters in their names.

Fixed the timers on the Global Wins leaderboard.

When knocked down by the storm, the elimination message will now properly read:

[PLAYER] was knocked down by the storm.

How are you enjoying Fortnite? Do you think the game is growing in the right way? Let us know.