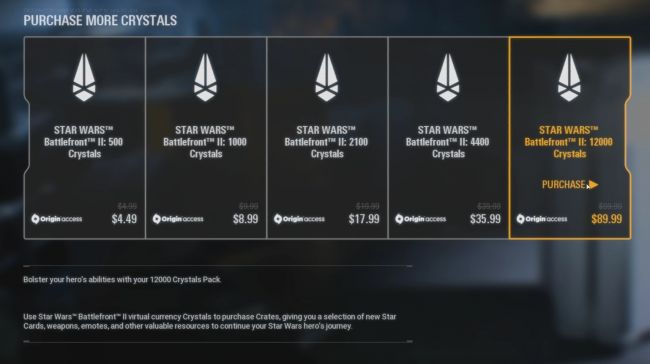 With EA’s Star Wars Battlefront II now available via early access on PC and Xbox One, we now have an idea of how much loot crates will be in the game! Loot crates in Battlefront II can be bought buy using the in-game currency called “Crystals” which we reported on last month.

Below, you’ll see the corresponding Crystals to dollar value of each package.

Important to note that these are the regular prices since there’s a 10 percent discount happening right now, which might just be for the trial or permanent to Origin members. As for the crates themselves, there’s the Hero loot crate, Starfighter loot crate and the Trooper.

Given the importance of Star Cards, which can be had in loot crates (or by progressing), there’s a certain fear from players that the game will be pay-to-win, regardless of what EA has said. We posted a story earlier today that mentioned just that — that the game is still pay-to-win. Obviously, we’ll be reserving judgement until we’ve managed to actually play it.

Speaking of which, we’ll have our Battlefront II review up as soon as we can (we haven’t received review codes yet), though we will give the game a proper shake by playing the multiplayer extensively, and the other modes as well.

Are you surprised by the loot crate pricing? Are you even considering getting some when the game launches this November 17 on the PS4, Xbox One and PC?

Make sure to check out the content roadmap of Star Wars Battlefront II to see what’s in store for players post-launch.