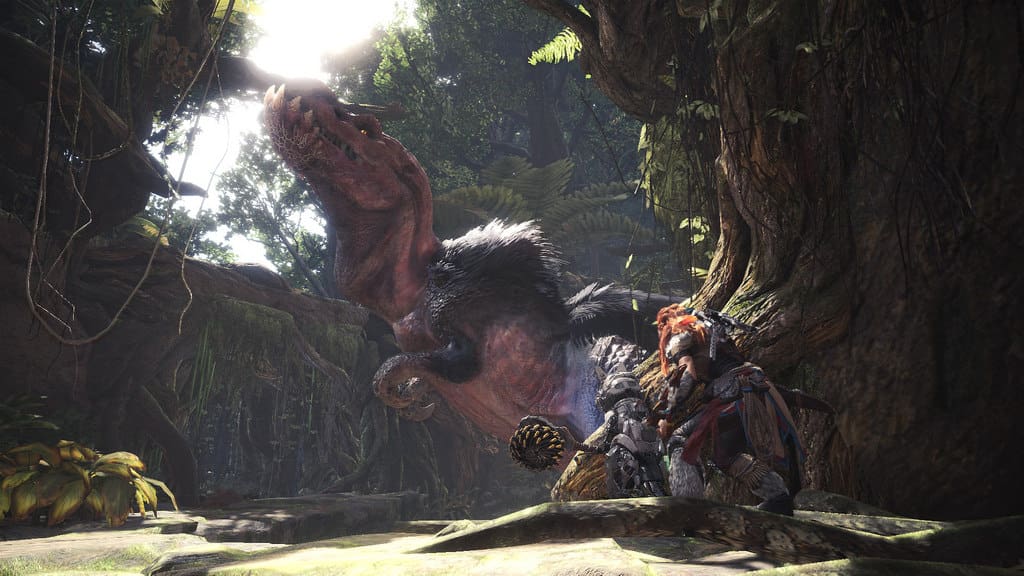 While we already posted on Monster Hunter World crossing over once again with Guerrilla Games’ Horizon Zero Dawn by letting players gear up as Horizon’s protagonist, Aloy, we’ve now gone in depth with a quick guide on what to do now that the quest is live!

Yes, you read that right! The Monster Hunter World Horizon Zero Dawn content for the Aloy armor and bow is now live! Players will be able to farm for the quest until March 15, 23:59 UTC (March 14, 6:59 p.m. ET). 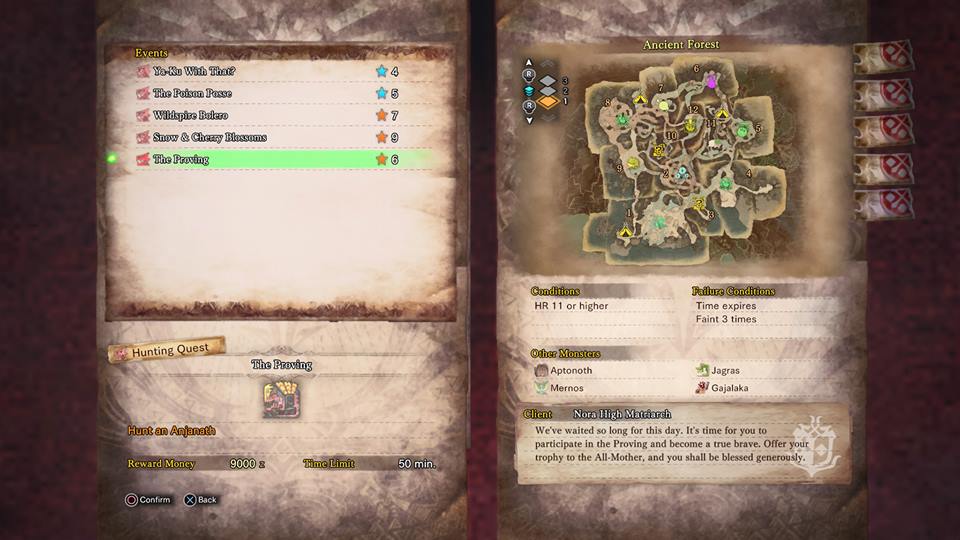 Go to the quest board or the handler, and go to “Events.” Once there, scroll to the bottom most choice called “The Proving” which should be familiar to Horizon Zero Dawn players.

I’ve screencapped what it looks like above. Note that you will need to be at least HR11 to partake in the quest, and all it involves is taking down an Anjanath, which should be easy-peasy for seasoned hunters.

Once you’ve accepted the mission, just go about it as normal. Slay the Anjanath to get the “Nova Brave Trophy.” You’ll need four of these in order to complete the armor set, so there’s a little bit of grinding to get it. And before anyone asks, yes, the armor set can be equipped by male or female hunters.

I’ve slayed Anjanath, what then?

Once you’ve captured or slain Anjanath via the quest, you’ll need other materials in order to complete it. The full materials needed for the Aloy a armor set are:

Once you’ve completed all the materials needed, head on over to the Smithy, and go the the “Forge Equipment” list, then to the “Full Armor Sets” category to see if you can craft it.

So, is it worth all the hassle of grinding for Anjanath (particularly the gem)? Check out what it looks like below and judge for yourself. 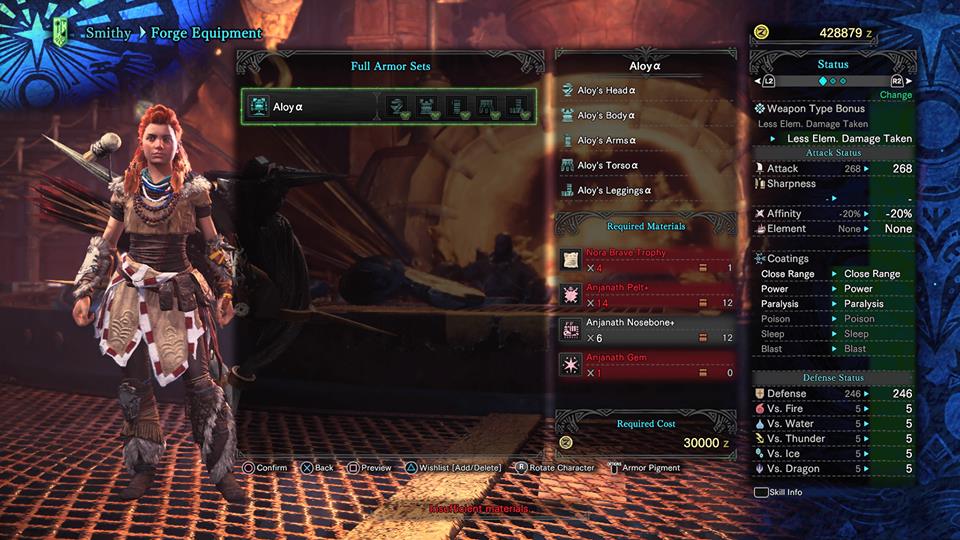 Should I play using the Aloy a armor set? Does it have its own skills?

For better or for worse, the Aloy a armor set isn’t just a skin but it has its own abilities per armor piece. We’ve outlined what each armor piece does.

In addition to these armor skills, there’s also set bonuses for equipping two or four pieces.

Two pieces equipped: Anjanath’s Will Adrenaline- Temporarily reduces stamina depletion when health is at 40% or lower

Is there a Horizon Zero Dawn weapon?

Yes, yes there is! There’s also an Aloy weapon, and to no one’s surprise, it’s a bow! Here’s what you need to farm in order to craft it at the Smithy:

The weapon which is officially called “Aloy’s Bow” is a rarity 5 weapon (base attack damage of 168), and has a hidden”thunder” element innate to it. It has one level 3 socket for Decorations, has an affinity of 20%, and can be coated with paralysis and poison. It can be upgraded to “Aloy’s War Bow” which is a rarity 6 weapon, and once upgraded, the affinity increases to 30%, and its base attack will be at 192, and can be tweaked with three Augmentation slots.

Check out what it looks below equipped by my awesome character. 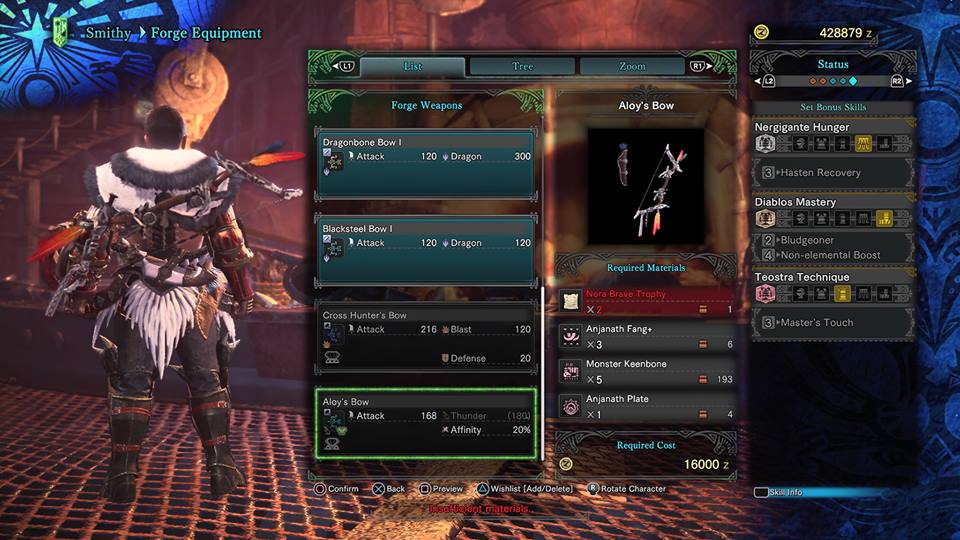 It definitely looks snazzy, I’ll give it that. Well, there you have it! This event and the content is (understandably) exclusive to PS4 players only. Verdict so far is, the bow seems to have the potential to be something viable for end-game players given its high affinity (30% after upgrading). Mix in another level 3 Deco slot, attack boosts, and it could be something special. As for the armor, it’s something you can fool around in, but not viable for end-game lest you want to become fodder to tempered Elder Dragons.

Capcom has also mentioned that if you missed the Watcher-themed Palico gear, you can nab it again as the Event quests are on a “rotating schedule.”

Speaking of bows, go check out our Monster Hunter World end-game bow guide below, along with the other guides we have.