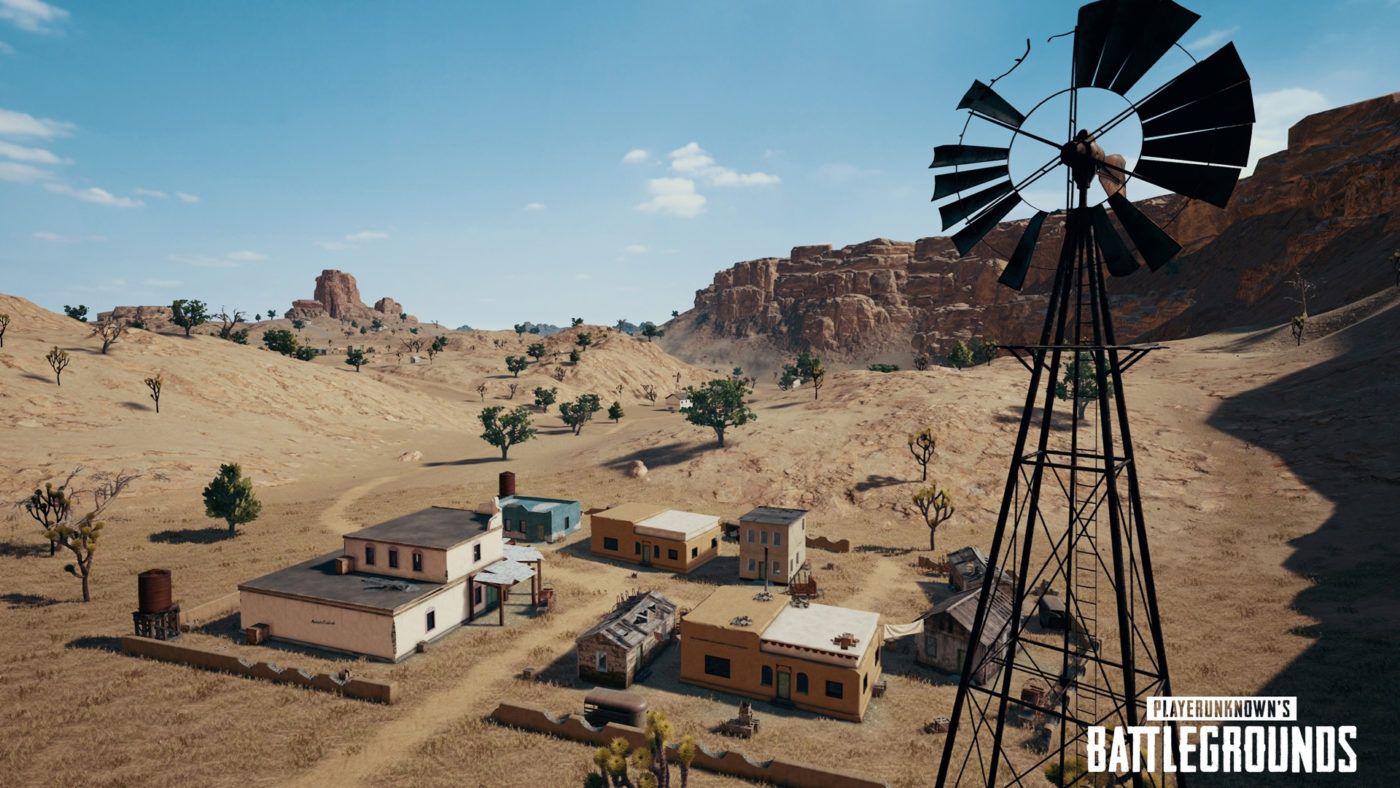 The PUBG Miramar desert map is now available for players to test on the game’s Test Server. With the game previously only having one map, which many players have sunk hundreds of hours into, I imagine a hell of a lot of gamers will be wanting to check out the new environment.

Here’s the schedule for playing on the Test Server:

To be announced soon

In addition to the new map, new patch notes for the latest Test Server build have also been shared.

Here’s everything that’s new and improved:

Redesigned the lobby background and UI

Added a new map – Miramar. Miramar will be the only map available during phase 1

Miramar builds on and modifies the core Battle Royale experience by providing varied visuals and gameplay:

Choosing the vehicle type is more important than before, as off-road driving is now different from on-road driving experience

Added R45. R45 will be spawned in world, it uses .45 ammo and 6 bullets can be loaded. Red dot sight can be attached. It has high accuracy and faster reload speed than R1895

Added Win94. Win94 will be spawned in world. It’s a variant of a lever action rifle that uses .45 ammo and 8 bullets can be loaded. It’s for an expert player since it doesn’t take any attachments and is mid-range effective with slow reload speed but high damage

Added Sawed-Off. Sawed-Off will be spawned in world. It uses 12 gauge shot and 2 shells can be loaded. No attachments available. It has short range, high dispersion, lower damage than other shotguns but can fire in rapid succession

R1895 will not spawn in Miramar

Added Van. Van is a six-seat vehicle. It has low maximum speed and driving force but it has the highest HP in the game. Therefore, the Van can be useful in various tactical situations

Added Pickup. Pickup is a four-seat off-road vehicle and designed to be well adjusted for Miramar’s bumpy terrain. Pickup is the most all-around vehicle in the game and suitable for various playstyles

Added Aquarail. Aquarail is a two-seat water vehicle. The player in the passenger seat can user their weapons. It has good cornering and high mobility so you can expect Aquarail to do well in guerrilla tactics.

Motorcycle and Buggy are also available in Miramar. They have different skins compared to their Erangel cousins.

Increased overall damage multiplier to Torso for sniper rifles by 10%

Redesigned the color of HP bar

Displayed in yellow when the HP is below 50%

Displayed in red when the HP is below 25%

Displayed in red and blinking when the HP is below 10%

The sound changes depending on the distance from the explosion

Lowered the sound of the edge the blue zone

Moved the camera to correct position in FPP mode for drivers

Transitions between sprinting and running animations are now smoother.

Leaning animations have been improved to ensure consistency between

Fixed the issue where while vaulting in FPP, player could look inside own body

Fixed the unintentionally extreme aim punch when being hit

Fixed the issue where the character movement speeds were inconsistent when using sprint button and travelling in any direction other than forward, forward left and forward right

When scoping and close to the wall, character should no longer be able to see through it

The launch of this build comes after a short delay, as explained on Twitter:

Due to a technical issue, our test server opening time is delayed by 2 hours. Servers will open Dec 8 2AM PST, Dec 8 11AM CET. We apologize for this delay.

Meanwhile, you can read the patch notes for test build and a short summary of our journey so far: https://t.co/VvsqlVRhpA pic.twitter.com/H8wyGS5Y3h

If you missed the PUBG Miramar trailer during The Game Awards 2017, click here to get all caught up.

Will you be playing the PUBG Miramar map? Let us know.

In other PUBG news, Brendan Greene has confirmed that the Xbox One versions of the game will run at 30fps at launch, two mobile games have been announced with trailers, and this plane tracker app lets players get an early advantage.

Here’s All of The Game Awards 2017 Winners, Including Game of the Year