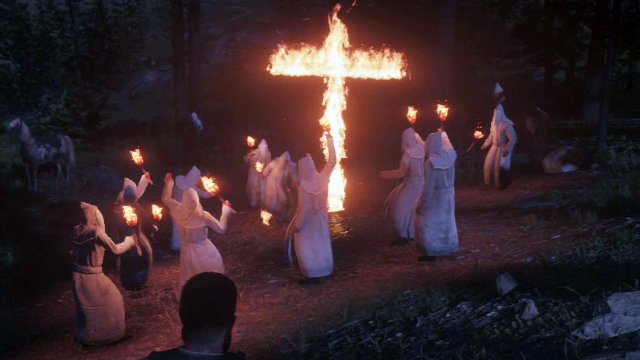 Rockstar Games seems to have stepped up their realism game with Red Dead Redemption 2. Not only are players required to actually wait for Arthur Morgan’s facial hair to grow before grooming it, but the studio even included one of the most controversial groups in history in the game, the KKK.

Those not familiar with the Ku Klux Klan, I’ll spare you the explanation, and just link to Wikipedia’s entry. Now that’s out of the way, did you know that there’s a KKK equivalent in Red Dead Redemption 2? Yep, they’re all racists, and even wear the white hoods as well.

If you’re curious where to find the Klan in Red Dead 2, we’re here to help. Thanks to YouTuber MELOO, we’ve listed them step-by-step below. There are multiple areas in the game where you can meet the KKK (usually in the woods), and aside from the location, you’ll need to be there at certain times during the day/night.

Only during night time

So what happens when you finally meet these hooded individuals? It’s up to you, but if you decided to kill them off, you’ll hear Arthur say unique dialogue like, “god damn hooded robes, I’ll kill all you bastards.” Or such gems like “you pathetic sack of shit.” You’ll also be able to loot some of them and come across the group’s “meeting notes.”

If you do decide to kill them off, make sure that none escapes or they will report you to the authorities and you’ll get a bounty on your head. Oh, and in case you’re curious, Arthur’s honor won’t get any penalty for killing any of the Klan, so go wild if you want to.